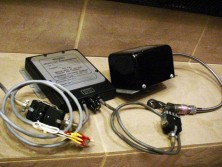 Aircraft multi-engine applications usually use an automatic system to match either engine or propeller speeds, or propeller phase. These systems are referred to as either synchronizer or synchrophaser systems respectively. This discussion explains the differences and the similarities of each from a reference point of former Woodward supplied systems. Woodward was once the predominant sync system supplier for light twin-engine aircraft.

A synchronizer system matches either engine speeds or propeller speeds as identically as possible, as if each are driven from one rather than two sources That is, as if they were geared to the same driveshaft even though the aircraft has independent engines, engine controls, and levers mounted in the cabin. When the system is turned on, it creates this speed match eliminating “beats” from propeller blades and makes jet cabin noise more constant.

A jet can use a portion of the Woodward system to match EPR (engine pressure ratio) during takeoff rather than matching engine rotational speed. While this particular system is equipped with an engine synchronizer, its capability is enhanced by the aircraft manufacturer to provide this unique function.

All pure jet applications are synchronizer rather than synchrophaser systems.  For propeller-driven light aircraft, although thousands have propeller synchronization (only) systems often these can be enhanced by upgrading to a synchrophasing system.

Pure jet applications have capability to sync either N1 (inlet turbine-what you see when you look into the front of a jet engine) or N2 (the high pressure turbine that you can’t see). Pilots will select sync of N1 or N2 based on aircraft flight condition to have the greatest effect on reducing cabin noise.

A system that controls both the rotational speed AND relative phase between left and right propeller blades is a synchrophasing system. As propellers rotate, there are both non-preferred and optimum phase relationships between left and right propellers.  These will cause greater or lesser noise and vibration within the cabin. The function of a “phasing” system is to provide rotational operation at the lower noise position.

Synchrophasing systems can be “fixed” or “variable”. Fixed “phasing” systems match relative phase to a preferred low noise position upon engagement. This is true only if phase targets are in the correct positions, as targets provide the system feedback as to propeller blade locations. A variable position synchrophaser allows the pilot control of propeller blade relative phase via a knob located on the aircraft panel.

Regardless of fixed or variable phase systems, speed synchronization is always maintained as long as sync is turned on and functional. Phasing is like “icing on the cake” providing lower cabin noise in propeller-driven aircraft.

Similarities
In the case of Woodward supplied sync systems, they can be either Type I  or Type II.  The latter provides more precise control.